Adherence and inhaler technique need to be checked on a regular basis [evidence level I, strong recommendation]

Elderly and frail patients, especially those with cognitive deficits, may have difficulty with some devices. Correct inhaler technique is essential for the optimal use of all inhaled medications (Melani 2011) [evidence level I] and is associated with fewer severe exacerbations. An observational study involving 2,935 patients with COPD, reported that in individuals who were treated for at least three months (n=2,760), the occurrence of prior (past three months) severe exacerbation was significantly associated with at least one observed critical error using prescribed inhalers (OR 1.86, 95% CI 1.14-3.04; p=0.0053) (Molimard 2017). Ease of operating and dose preparation were rated as being the most important inhaler features leading to higher patient satisfaction and fewer critical errors in a randomised, open-label, multicentre, cross-over study of two inhaler devices (van der Palen 2013) [evidence level II]. An Australian cross-sectional study found that the proportion of patients with COPD who made at least one error in inhaler technique ranged from 50 to 83%, depending on the device used (Sriram 2016). Similarly, a systematic review and meta-analysis of 72 studies involving asthma and COPD patients, reported that 50-100% of patients performed at least one handling error.  The pooled summary results for pMDI estimated an overall error rate of 86.6% (95% CI 79.4-91.9) and for DPIs it was 60.9% (95% CI 39.3-79.0) (Chrystyn 2017) [evidence level I].

With the proliferation of new inhaler devices, inhaler device poly-pharmacy is becoming an increasing problem amongst COPD patients and has a negative impact on outcomes (Bosnic-Anticevich 2017)  A study of 16,450 COPD patients compared exacerbation frequency and SABA use of patients who were using similar style inhalers e.g. all MDI to those that were prescribed devices that required a different technique.  Those in the similar device cohort experienced fewer exacerbations (adjusted IRR 0.82, 95% CI 0.80 to 0.84; and used less SABA (adjusted OR 0.54, 95% CI 0.51-0.57), compared to the mixed device cohort.  These data support the recommendation to minimise the number of different devices prescribed in COPD patients. Single combination inhaler devices have comparable efficacy to multiple inhaler devices, delivering the same medications and doses without any additional safety concerns. Retrospective and prospective studies have shown that using a single inhaler was associated with decreased healthcare resource utilisation and improved cost-effectiveness compared with multiple inhalers. However, due to the lack of long-term data, differences in outcome definitions and study designs, robust conclusions regarding the differences between single- and multiple inhaler users cannot be made (Zhang 2020) [evidence level I].

An infographic highlighting important considerations for in haler device prescription is included below. 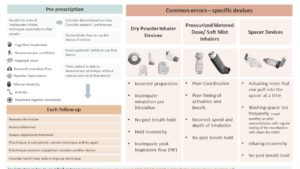 Lung Foundation Australia has developed a series of inhaler device technique videos and factsheets for patients which provide step-by-step instructions on correct inhaler technique.  These are available at https://lungfoundation.com.au/resources/?user_category=32&search=inhaler%20device.

Lung Foundation Australia’s Stepwise Management of Stable COPD available at https://lungfoundation.com.au/resources/?search=stepwise has images of asthma and COPD medicines on page 2.  These are linked directly to the video and factsheets page on the Lung Foundation website via the Zappar app.  The app allows the user to scan the images on either the hard copy or on-screen using their mobile device and the videos will automatically open on their device.

The National Asthma Council has produced a number of “how-to” videos which are available on their website at https://www.nationalasthma.org.au/living-with-asthma/how-to-videos. The Lung Foundation Australia resource, Better Living With COPD: A Patient Guide contains an inhalation devices chapter which can be accessed at https://lungfoundation.com.au/wp-content/uploads/2018/09/Book-Better-Living-with-COPD-Dec2016.pdf.

The cost of inhaler devices varies between products. As there are no differences in patient outcomes for the different devices, the cheapest device the patient can use adequately should be prescribed as first line treatment (NHS Centre for Reviews and Dissemination 2003). The range of devices currently available, the products and dosage, as well as their advantages or disadvantages, are listed in Appendix 2. Brief counselling; monitoring and feedback about inhaler use through electronic medication delivery devices; and multi-component interventions consisting of self-management and care co-ordination delivered by pharmacists and primary care teams have been shown to improve medication adherence (Bryant 2013) [evidence level I].